Just weeks after experiencing a massive earthquake, the largest storm known to man hit our Philippine shores. The typhoon almost covered the entire country as it wrecked homes and took thousands of lives. In Cebu we felt heavy winds and ha 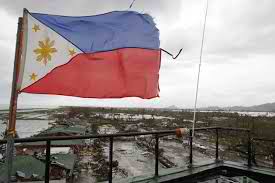 rd rain as the storm flew over us. Glass walls were shattered, trees were uprooted, and concrete electrical poles were snapped in pieces.  Debris from the storm still covers our city and we just got our power and water back after losing it for days.  But as bad as it was in Cebu the destruction was far worse just North of us.  Many of you may remember that we have a family from our church ministering on a remote island in northern Cebu. Their island was in the direct path of the storm. The missionary’s home they are staying in is concrete so several members came to weather out the storm at their place. The roof of their house was destroyed and four other members completely lost their homes. Pastor Walter said boats were flying through the air as the storm ravaged their island. Praise the Lord, no one was hurt but the damage was immense. It is suspected that ten thousand Filipinos lost their lives in this terrible storm. Both the earthquake and the typhoon have left enormous damage.  We pray that even though the circumstances are awful, God can use these disasters to show His hope and salvation.