We had an exciting conclusion to our deputation trail!   For two years now the Lord has protected us on the road and only once have we ever broke down.  During those two years we prayed specifically that our car would last as long as we were on deputation and that it wouldn’t cause problems for the next owners.  Well, the day after our meeting in Porter Corners we continued our journey to Massachusetts.  It’s a long trip through some pretty isolated terrain but I wasn’t too concerned and focused on enjoying time with my brother.  We had driven a good hour when the car started to make a terrible rattling noise.  I’ve never heard our car make this sound before and immediately knew that something was very wrong.  We had just started to climb a hill when I decided it was time to pull over.  Now I was concerned, here we were in the middle of nowhere, stuck on the side of a hill.  Things looked pretty bad and I was supposed to meet my sister in Massachusettes later that day.  In just ten minutes a man stopped by in his truck and asked if we needed some help. He took a look at our engine and confirmed my suspicions, my car wasn’t going to make the trip Massachusetts or anywhere else for that matter.  The good news was that just down the hill there was a mechanic who could set us up with a rental car!  We had just enough power left in our Toyota to crest the hill and coast into the shop.  The people there were great, they bought our car and gave us a discount for our new rental car.  Throughout it all God made it very clear to us that He was in control.  At the time it looked like a terrible moment to lose our vehicle but now I’m so glad it happened.  Yes, glad!  Hey, God answered our prayers; the car lasted for the entirety of deputation and it didn’t cause the next owner any problems!  On top of it all we somehow managed to break down in the middle of nowhere, not even five minutes away from a mechanic.  Coincidence?  I know better than that.  And because our car broke down I no longer have to deal with the paperwork that goes with giving a car away!  God is so good.  We were so happy I think the mechanic must have thought we were a little strange.  Two hours later we were on the road again as if nothing happened.  I met my sister and enjoyed telling her our story!  My God has taken great care of us throughout our adventures here in the States.  I think this whole ordeal was another way to remind us that He is always in control and that He’ll be with us on that airplane going to Cebu.  I’m reminded of the verse in Romans, “…if God be for us, who can be against us?  He that spared not his own Son, but delivered him up for us all, how shall he not with him also freely give us all things?”

Praise the Lord, our deputation has been completed!  Our last meeting took place far north in the Adirondacks where we visited Pastor Delello and Victory Bible Baptist Church.  I had gone to Porter Corners once before as a single missionary just starting deputation so it was neat that this is where our travels ended.  A lot of things have changed since the last time I was with them.  The church has been completely redone and looks great!  What a testimony of God’s provision.  Throughout this week my brother, Andrew, has been spending his school break with us.  I was thankful that He was able to see so many churches in different phases of their ministries, all serving the Lord in their area.  What a great way to finish a wonderful journey!

A brand new church, meeting in a local YWCA, invited us to come and present our work!  Grace Baptist Chapel just celebrated it’s first year this January and has already focused its attention on missions.   We met Pastor Hall through a couple of different activities; first through summer camp and the other through deputation at Grace Baptist Church in Beaver Dams, NY. It was a blessing to see the fruit from the church’s labors through their missions giving both at home and abroad.  Already this new work supports missions internationally and as for supporting missions on a local level, we were able to meet a whole family that had accepted Christ as their Savior!  God is still using His church to touch the lives of people! 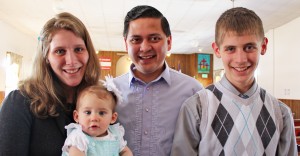 While we have finished all of our missions conferences we still have a couple more meetings before  we leave at the end of the month.  This Sunday we were with Pastor Grimes and Sempronius Baptist Church.  Also, the Lord has given us an extra special blessing this week! My brother Andrew had the week off school and wanted to spend his time off with us.  We’ve had fun spending thsee precious moments with him. Unfortunately, schedule is crazy this week and we will be driving more than ever as we travel to different churches.  We have already driven over ten hours this weekend!  So please pray for poor Andrew (and Abigail).  He’s getting a taste of being a missionary this week.  He’s done great so far and we love having him with us.